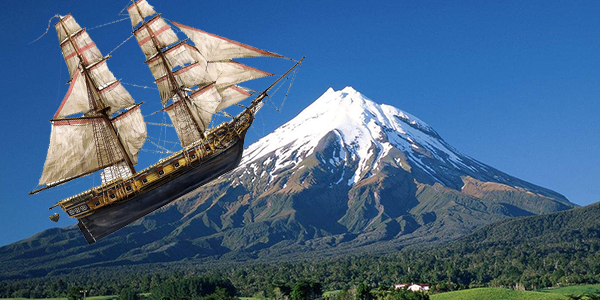 Pop quiz: How could learning to sail teach you to climb a mountain? To put it another way, do you teach pop music by insisting a student read 150 year old sheet music first?

I always ask my students what they want to learn in their first lessons. They don’t always have a straight answer, but they can usually name a few songs they’d like to be able to play. The ones who really want to do pop music tend to have a gag reflex for reading notes.

There’s a timeless debate about this among piano teachers, and it goes like this: Some teachers prefer to just dive straight into method books, which usually teach reading skills as a way to learn how to play the instrument. Other teachers immediately teach their students how to play songs by ear, or by showing them chords and teaching them how to read simple chord charts. The question is simple: is it appropriate to teach pop music? Some say yes, some say no.

The teachers who focus mostly on reading first, about 70% of them, often don’t play much by ear themselves. The teachers who go right to chord charts and teach ear skills first, in the 30% range, often have less than stellar reading skills past a certain point. There’s no way to know how many teachers cross their students over to the other “side” during lessons, but it’s reasonable to assume that a certain percentage of them do. Teachers on the extremes of each side tend to view the “other” side as suspect. Each camp could rightfully point to large areas of instruction that are completely lacking in the other camp.

Let’s put it another way: what if you wanted to climb a mountain, and you went to take mountain climbing lessons, and the teacher immediately started showing you how to operate the sails on an amazing reproduction of an 18th century sailing ship? I’m talking state of the art, perfect 18th century design, here. All the bells and whistles. If you objected, maybe they’d say “look, you think you want to climb this mountain right now, but the skills in sailing directly transfer to mountain climbing; you just don’t know it yet.”

Would you find another mountain climbing instructor?

What if they were right? Sailing involves a lot of planning, understanding materials, tying ropes, first aid, climbing up the mast. Sword fighting. Maybe these are the skills needed to climb the mountain.

If you were an 8 year old student, how would you know what to do?

As a teacher, I often find myself confronted with this dilemma, and I have a simple solution that’s so easy, I can’t believe no one ever told me about it.

I ask the student who wants to play pop music what song they want to learn, and I show it to them, on the spot. I create charts like this in under 5 minutes: 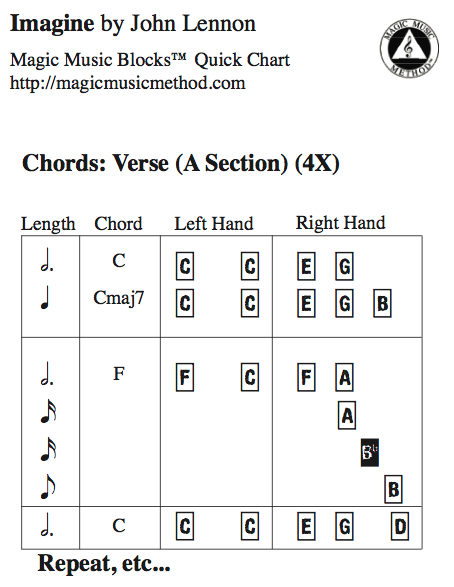 Then I explain the chords, have them run arpeggios on the chords, teach them the major and minor scales of what key it is in, and then write out a simple arrangement on blank staff paper right in front of them. Since they don’t know how to read music yet, they now have a goal: understanding what the hell I just wrote down right in front of them. Since it’s a song they actually want to learn, they now have a reason to work to learn how to play it. I teach pop music to students so they have warmup exercises that motivate them, and in the process, they encounter musical puzzles that teach them more advanced skills.

That simple action opens the door to all the basic lessons of how to identify notes, chords, and scales on staff, how to see and play intervals, and the entire foundation for reading music. Writing becomes the tool used to learn reading, but it’s all based on understanding and hearing music the student already loves. It’s a win/win situation, and the language of music is learned just like any other language: by listening, then speaking, then writing and reading.

If I’m feeling fancy, I might even drop it into Sibelius and print it, and let them watch me input the notes. I might even let them do some of this, and put some of the notes in wrong, and ask them to find the mistakes and fix them. For instance, can you spot the mistake in the handwritten image earlier in this post? Something is missing in measure 2.

See how the example above is chords only? After they can play the shapes, I show them the rhythm. I might even have them learn to notate the rhythm on its own one-line stave.

As soon as possible, I pair the pop song with a beginner level classical piece, or etude, that’s in the same key. It’s not hard to find them; if they aren’t on IMSLP, they're in my library somewhere. By learning the pop song, the student is learning chord patterns, arpeggios, inversions, and the whole thing is a big warmup exercise. Once it’s paired with a classical piece, they can see that all music is made of the same ingredients!

Just like the mountain climbing instructor who wants the student to learn how to sail in a ship, I end up teaching them how to tie ropes, climb a mast, work with a carabiner, do first aid, and improvise, but now they understand that there is a common ground here. They aren’t going to sail up the mountain, but they will climb it using the same skills. And if they want to go sailing when they are older… they will know how!

If you’re a teacher, do you do this to teach pop music as well? If not, why not? Drop in a comment below and tell me what you think.