The First Law of Music – Part 3 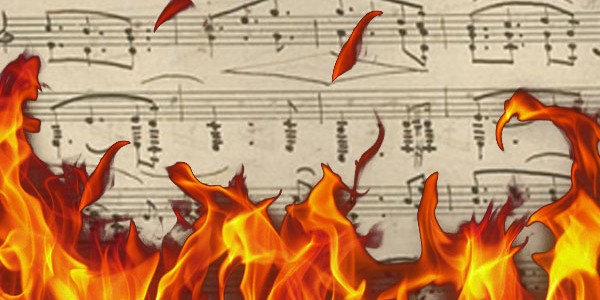 Valerie was lucky. Unlike Jimmy in Part 2 of this series, Valerie had never been faced with this kind of crisis in music. For her, coming to lessons was a release from the stress of the world. It was her idea to play and no one else’s. She didn’t have to be told to “practice.” She understood how to work on her technical skills with basic classical and jazz pieces, through improv and composition, and by playing all the Magic Music Method card and dice games.

Now she was playing the Chopin prelude with more feeling, even though there were still little mechanical slip ups in places. We worked on correcting them as soon as they appeared, but the heart of the music was strong. Her rhythm, her tempo, the feel of the music was finally working.

I shared my enthusiasm with her. “When you play with your heart and trust yourself, it’s easier for your fingers to find the notes. This is what it feels like to be in the moment of creation, that explosive expression which comes out of nowhere.”

She seemed lost by the last part. “How could it come out of nowhere? It had to come from somewhere. Chopin wrote the song, right?”

“Where does a song come from, really?” I asked, rhetorically. “If Chopin wrote this song with a particular feeling in his heart, could we ever really know what that felt like when we play it 165 years later?”

She thought about it. “Maybe. He could have written about it in his diary.”

“Good point,” I replied. “But let’s imagine we don’t have his diary, and all we have is our imagination. One day, Chopin sat down at a piano and something came to him, as if from another place, and it was this song! It may have appeared in his mind, he might have heard the music in the wind, or he might have just watched his fingers start to dance, but he was in the present moment. He was in the “now.” Do you follow me?

“So… this is the present moment too….” she said.

Jimmy wasn’t able to get to the present moment yet. His experience with music had been hijacked by a terrible feeling of guilt and frustration that anchored itself to the piano like a barnacle. This was the truth I had seen, and I had to be careful about how I shared it with him in front of his mother.

I started softly, addressing Jimmy but directing a lot of the energy at Beatrice.

“There’s a lot of stress between you guys. I have a radar that goes off when I feel that, and I always, always insist that you let me be the person who’s in charge of your practice schedule. Not your mom. Me. That takes away the stress. If you are my student, you are only accountable to me. Your mom is not your music teacher.”

Beatrice jumped in again, and said to her son, “Are you listening to this? This could be a really good transition.” It was well intentioned but came across very pushy.

Jimmy quickly replied, in a deflated tone, “It’s not my thing.”

I knew that this wasn’t true. Music was one of his things. It had been his idea to take lessons, he was good at it, and he enjoyed it. So I took a different approach.

I continued, “That’s ok if it’s not your thing, I respect that. I respect your right to decide what you have a passion about. If you go back to lessons in the future, you’ve got to separate those feelings from music. Putting bad feelings together with music is a recipe for disaster. I just have to say that, as the music teacher.”

Beatrice’s expression was starting to change. It seemed to be dawning on her that how it feels to play music is not just equally important to what someone is playing. It’s more important. Screaming at her son to “practice” was making him hate music. Even if he got really good at it, he’d just be good at something he hated.

Beatrice was starting to sound more confident with the idea of letting Jimmy take a break, as long as she had a say in it.

Thinking this over, she said “Well, if that actually works, that would be great. He’s gonna like piano. And I think at this moment he doesn’t like piano.” Turning to look at her watery eyed son, she continued, “Maybe you could try and play it a little bit on your own and I won’t say anything to you about it, but get on the piano during the summer and…..”

I could see that she was trying to hold on to control. She couldn’t handle letting Jimmy decide for himself. She thought she knew what was best for him, and in her mind, he was going to play piano. It was all coming from love, but it was having a very tragic and unforeseen effect.

Jimmy was taking great mental notes. I could see it in his eyes. He was going to do the opposite of everything she wanted him to do, no matter what it was.

I had to be clearer.

“A lot of people have bad experiences. It’s important not to let that control your relationship to music. There was this guy, Pavlov, who discovered something amazing. He would ring a bell every time he fed his dogs, then every time he rang the bell, the dogs would salivate, expecting to be fed. Pavlov figured out that people are the same way. The way you feel while you’re doing anything can get attached to that activity. But you’re not a dog, you’re a person, and because you’re a person, it’s possible for you to actually gain control of what feelings are attached to what activities. You don’t have to be a victim.”

“So it could be as simple as doing your math homework and a family member dies. Some terrible thing happens one day when you’re doing your math homework. And from that day on, you might not even remember why, but you’ve really started to hate math. Emotions, feelings, when they anchor themselves to an activity, can be positive or negative. If they’re negative, a lot of the time you might think that you hate the activity. What’s really happening is you hate the way you feel. The good news is that you can change this.”

“It happens with food all the time. What’s your favorite food?”

He thought for a second.“Pasta.” What an amazing coincidence, I thought. Pasta used to be the one food that upset me so much, I had to get up and leave the table. But I figured out what was going on, and transcended it. I told him about my pasta trigger. “I actually used to hate pasta. You know why I hated pasta? Because we always used to have spaghetti after a baseball game. My dad was the coach, and he died of cancer when I was 12. After he died, I couldn’t eat spaghetti. I couldn’t stand it, and I didn’t know why. That lasted for 15 years. And then I started to realize, 'Wait a second, why do I hate spaghetti? There’s nothing wrong with spaghetti.'”

Beatrice was listening too. She seemed more engaged the more I explained things. Maybe she was getting something out of this too. I continued on, “I don’t really hate spaghetti! It just reminded me of something that was too painful to think about, so I avoided the thing that reminded me of what I couldn’t have anymore: for some reason spaghetti reminded me of my father. You have a right, as far as I’m concerned, to decide whether or not you want to play piano, because piano might be reminding you of something you don’t want to feel. Either way, you need to know two things. Thing number one is you’re good at it. This doesn’t really matter if you don’t want to do it but you should know that. Thing number two is you may be having a bad time because of something that has nothing to do with music.”

His eyes shot up and glared at his mother like laser beams.

Beatrice looked mortified and guilty at the same time. She quickly defended herself as thinly veiled resentment poured out onto the floor like dry ice. “I’m not screaming at you,” she muttered through her teeth. Jimmy and Beatrice looked at each other with evil eyes. I stepped in to try and avoid the fight that seemed inevitable. I didn’t want it to escalate; I didn’t want to be identified with either side. I tried to steer the conversation.

“Look, whatever that dynamic is, it’s none of my business, and it’s also….”

Beatrice cut me off suddenly, and surprised me with something I never expected to hear her say. It took a minute for me to realize what was going on, but it made sense the more I tried to put myself in her shoes.

If you were in her shoes, what would you have said? Post a comment below, and check out the final installment of this series,“The First Law of Music, Part 4”, where I reveal her unexpected reaction, how I handled it, and the real secret to Valerie’s success.