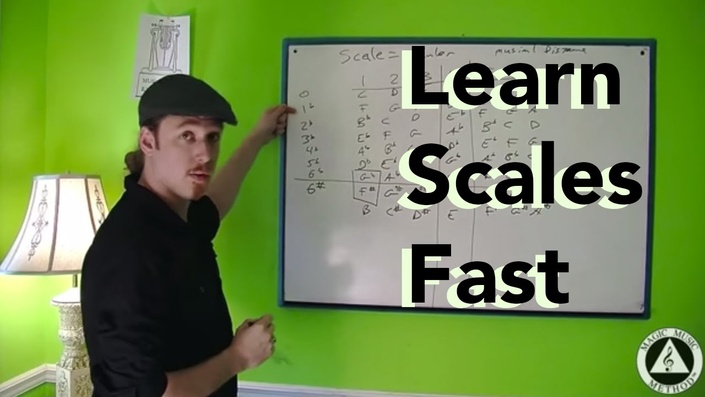 Download this PDF and do the worksheet along with the YouTube video. Practice daily, and you'll have your scales memorized... fast.

The coupon code you entered is expired or invalid, but the course is still available!

Scales are simply ways of measuring the distance (or "scale") between notes. The patterns are very straightforward and consistent, and when you learn them with this method, it doesn't matter what instrument you're using... and you don't have to read musical notation to learn them.

After you've memorized the patterns, it's MUCH EASIER to learn how to write those patterns down with musical notation.

This breakthrough has helped hundreds of students master the fundamentals first, before getting crazy with dots and lines, and before building big musical cathedrals out of the basic shapes and patterns described in the Magic Music Method.

Give it a shot today, watch the video for free on YouTube and if you want to truly master it, drop $7 on the PDF (that's less than $1 per key) and put in a little work daily for 2 weeks. You'll be glad you did later on, when music theory gets ten times easier.

I'm a creative alchemist, living my life on the line between pure creativity and a structured understanding of music.

I was trained young by a hit songwriter mom and a therapist dad. Losing my father at 12 put me on a search for the deeper meaning behind everything. This led to decades as a pilgrim seeking the holy grail of personal transformation through music, video, performance, and the written word.

Trained by life to find the signal in the noise, I serve as a catalyst for the transformations of others. I created the Magic Music Method to help my students stay engaged by focusing on creative piano patterns and chord based playing, while also keeping basic literacy and proper technique in focus.

This method is compatible with every other method, and can be used as a supplement by teachers looking to increase their creativity and improvisation tools.

PDF and Video
Available in days
days after you enroll

When does the course start and finish?
The course starts now and never ends! It is a completely self-paced online course - you decide when you start and when you finish.
How long do I have access to the course?
How does lifetime access sound? After enrolling, you have unlimited access to this course for as long as you like - across any and all devices you own.
What if I am unhappy with the course?
We would never want you to be unhappy! If you are unsatisfied with your purchase, contact us in the first 30 days and we will give you a full refund.
off original price!

The coupon code you entered is expired or invalid, but the course is still available!