You Always Have Permission To Be Creative 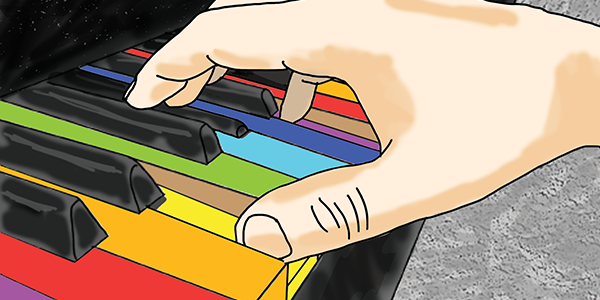 By the power invested in me as a Creative Piano Teacher, I hereby formally invest you with eternal, irrevocable permission to be creative, whenever you want, however you want, on any instrument, for as long as you want, each time you work on or play music.

I am not in charge of whether or not you use this privilege. In fact, I never was. When I just gave you permission, I was giving you something that was always yours. Do yourself a favor now and take possession of this divine birthright.

There’s no need to:

-Wait until some future point in time

-Ask for anybody else’s permission

Technical study is an eternal search for a kind of perfection that is never completely reached. Creativity, on the other hand, is your birthright as a human being, and you can be creative right now with whatever skills you currently possess.

In fact, creativity itself can lead you right back into higher levels of technique.

I recently sat down with a new student, an adult student whose mother had been a piano teacher. This student had grown up around music, but for some reason, she had an emotional blockage around creativity. She could read music already, which was great, but she didn’t have the feeling of truly playing, in the sense of a child playing on a playground. She could copy, she could imitate, but it didn’t feel like PLAY.

Of course, attaining technical skills to the point of unconscious mastery makes it much easier to let loose and have fun, but that wasn’t the problem. Even with the skills she came in with, some of which were enough for many other students to already be having fun, she wasn’t having fun. She came to me because she heard that I’m a creative piano teacher, and I could help lighten things up.

So I asked her to look at the notes on the page, and then I said “Looking at those notes, can you tell me what is the cause, and what is the effect?”

She didn’t quite understand the question, so I told her about the feeling I had had as a child, hearing symphonies in my head. It was magical. When I got to my first piano teacher, she skipped past the phase of listening to music, speaking the music, and thinking about the sounds, and pushed me straight into reading. I always wondered, where did those little dots come from?

I figured out later that the little dots were notes that came from another person who heard the music in their own mind, and wrote the notes down at some point. It sounds so simple, but people forget this a lot.

Years after the initial moment of inspiration caused the composer to hear, play, and then write the music, I was sitting there as a child, interpreting an artifact of their creativity like an archaeologist dusting off Egyptian hieroglyphics.

What about my creativity? That was considered secondary.

Only when I got to my second piano teacher did my creativity become something worth discussing and supporting in the lesson. As a result, I found a renewed interest in studying the creativity of the great masters who came before me and left their gifts for the world to read, interpret and remember. These things are NOT mutually exclusive, but sometimes it seems that way. It takes training for some people to realize this.

My new student had not been so lucky. For whatever reason, it had not occurred to her, or it had not been presented to her as a possibility, that her own creativity might be important, and even relevant, to the study of the artifacts of other people’s creativity. So, I gave her some creative musical card and dice games to play, using scales and arpeggios that would allow her to simultaneously expand her technical vocabulary.

She’s now working through these patterns with a standard pack of Bicycle brand playing cards and some dice she got at Walgreens. She’s learning how to practice scales and arpeggios the way composers always have: by running the patterns up and down the keyboard, and then improvising music at the level that she is comfortable with. She's working through her foundations using a system I created called the Magic Music Method. You can try it out by taking the Easy Chord Games course.

When you repeat something that was done in the past by reading a score, you are studying the creativity of someone who caused the notes to be committed to paper. They are worthy of our respect and attention, and at the same time, you have to be creative yourself in order to imagine what the music needs to sound like. To transcend a mechanical performance, it takes creativity to breathe life into an old piece of music. But it doesn’t stop there.

This creativity can be cultivated by engaging in a discipline of improvisation. Improvisation with randomly selected musical patterns, generated by card and dice games, causes a constantly shifting world of possibilities to appear.

In the moment of trusting the randomness, your unconscious mind will spontaneously create order out of the chaos. If you learn to listen to this emerging sense of musical order and follow it as it wakes up like a newborn baby opening its eyes for the first time, it will take you into the core of what it is to be a musician: you are a CREATOR!