The First Law Of Music – Part 2 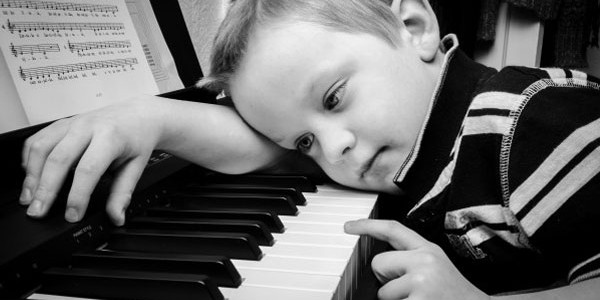 Love may be the “first law of music,” described in Part 1 of this series, but this is not always clear to the students or their parents. Sometimes it's painfully obvious to everyone but the people who need it the most.

The phone rang one day a couple of hours before my lesson with Jimmy was scheduled. His mother, Beatrice, was on the line, telling me what every teacher fears to hear the most: Jimmy was quitting.

What’s worse, he was quitting because he “hated piano”. How could this be possible?

Having a student quit is a very unusual situation for me. Sure, people take summers off or occasionally move to other towns. Lives get busy, and sports take over. But this was different. Jimmy was quitting music. Something had gone horribly wrong. I was confused; I knew for a fact that Jimmy didn’t hate the piano at all. Something weird was going on. Time to put on my Practice Detective hat…

I went over the case at hand mentally. Jimmy could play by ear. He was excited about learning new songs. He was developing his skills based on what he loved. I treated him with respect even though I knew he didn’t get much of it at home. I was providing him with a refuge where music could become an escape from all the stress, at least once a week in his lessons.

The stress won this round. Clearly there was more going on than I was aware of. I hung up the phone, and mentally prepared myself for his final lesson.

When he came in with his mom later that day, Jimmy’s problems made sense for the first time.

Beatrice came across like someone who just can’t take it anymore, shrugging, shaking her head as if to say, “Not my idea…. Look at this idiot! Quitting piano lessons. Can you believe it?”

I realized that everything I had been doing as a teacher paled in comparison to her influence. It was clear that as soon as he got home, she nagged him about practicing, pressured him, hung over his shoulder, corrected his every mistake, and fiercely judged his progress. Despite her best intentions, she had unconsciously taught him to utterly hate music.

She was trying very hard, and only wanted the best for her son. But she had no idea how to give it to him.

With palpable hesitation and embarassment, Beatrice turned to Jimmy and said, “So I told Ernest that you don’t want to… uh… Take lessons anymore.”

Like a prisoner, broken by years of interrogation, Jimmy winced, “Yeah…..”

She continued, trying to stay cool, “I thought that we could have one last conversation about it.”

I turned to Jimmy. “So what’s on your mind?”

The idea that I actually cared about how he felt seemed to give him courage for a moment. He blurted out, “Well….. every time I practice, my mom’s always screaming at me!”

I waited a second before responding. I was sitting in a small 8 foot by 10 foot room with this kid, and his mother was glaring at him like one of the big evil bird characters from the Jim Henson movie The Dark Crystal. I wasn’t sure how to proceed, as I could see both sides of this problem and I wasn’t about to pick a fight with either of them. So I asked him another question.

“If she wasn’t screaming at you, then would you want to play piano?”

He kept looking down. “No, not really, not anymore.”

Not “anymore”, he said. Something had changed. I asked, “How do you feel about that?”

Ok, now I could deal with this. Jimmy felt horrible about the situation. So there was definitely something there to work with other than his mom screaming at him. I told him about what I felt like when I had problems with piano at his age. I shared my story with him, of how I had felt some of the same things he was feeling.

I shared how I had felt guilty for my failures as a student at one time, and started to resent the piano. I slowly began to dread going to lessons, so we switched teachers. I got a new teacher, one of the best in town, who had other students that were the kids of successful musicians, and she was very flexible with her approach. She taught me how to write my own compositions down, and how to improvise in different styles. She was funny and outgoing, and larger than life, and still is. And all of this really helped me overcome my problems, and find a new love for the instrument.

But other things were happening in my life too. At the age of 12, during the 18 month period of my father’s decline and death from cancer, I quit taking lessons and changed my entire focus to guitar, bass, and drums. I needed an outlet for my rage, and rock music gave it to me. For years after that, before I formally studied piano again in college, despite my accomplishments as a multi-instrumentalist, in my mind, I secretly felt like a failed musician. I would only discover, years later, how valuable my time studying other instruments really was to me as a piano player and teacher.

I could tell Jimmy was feeling like a failed musician too.

I got him to look up from the floor at me, and I told him, “Jimmy, it’s not the end of the world if you stop taking lessons. The end of the world would be if the only experience you ever had with music was stressful. I try to never let the relationship that I have to music get poisoned by stress. That way, music is always a game. Instead of making you feel bad, I want you to love music, whether you're taking lessons or not.”

Just in case I was wrong, I tossed in a little extra disclaimer: if he was bored or didn’t like piano, he was entitled to have an opinion. “As far as I’m concerned, the door’s always open. You can come back if you change your mind. That’s how I feel about it.”

Beatrice chimed in, instantly stepping all over the vibe I had carefully set up. “Are you going to continue to play?”

“No,” he replied, nearly cutting her off.

That last statement sucked all the air out of the room, fast. I glanced at Jimmy, who looked like he was physically bracing himself for a violent reaction. After wondering if something even more sinister was going on, I realized that this was the only chance I’d probably have to make this point in a way either of them would remember, because they clearly wouldn't be back anytime soon.

I thought about not saying what I knew was true. I thought about past students who had intense and emotionally toxic relationships with their parents. I thought about how Beatrice might feel threatened by what I had to say, and I had compassion for her, because she was clearly very upset.

Then I thought, what the hell. Maybe she won’t like it, but they both need to hear it, and this was probably the only chance I’d have. I thought if I did it with compassion, maybe, just maybe, she would feel it in her heart and it would give Jimmy something to remember later on. Maybe he'd remember it when he was a little bit older, and return to lessons, because he knew the door was still open.

I thought, “Even if it hurts, even if it’s dangerous, even if it scares me to sit in this tiny room and tell them what I see, I have to honor what my father always told me, one of his final lessons to me before he died when I was Jimmy's age: 'Even if it gets you in trouble, it’s better to just tell the truth.'"

So I told them.

What would you have told them? Post a comment below, then check out Part 3 of this series, “The First Law Of Music”.